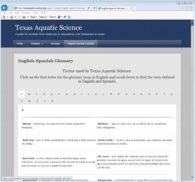 English as Second Language Students learn Spanish Aquatic Science Terms One of the dreams of the developers of Texas Aquatic Science has always been making aquatic science as accessible as possible. In the largely Hispanic school districts in Texas this dream motivated development of Spanish aquatic science support efforts.  As a result, a new English […]